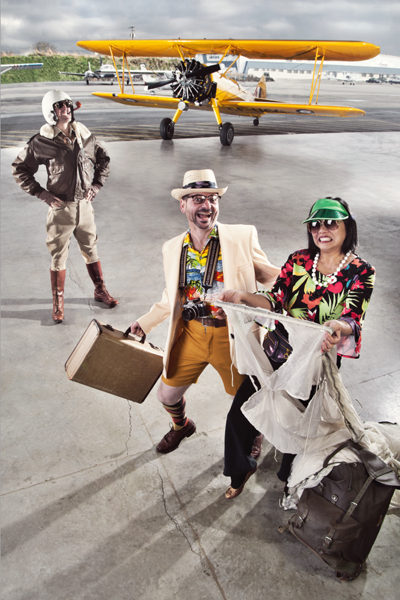 So to get started, I actually want to take you back in time, to the fall of 2010.

It had been a huge year, an Olympian year here in Vancouver, and I was booked for 220+ days. At the end I was burnt out, and needed something purely creative to do. So the project that grew out of that was a portfolio piece that I wanted to share with my clients and friends for the holidays.

The story concept I started with was to create an engaging scenario that people could find themselves in if they left their holiday plans to the last minute, and then add my personal touch and make it ludicrous. So the question I settled on as a starting point was: what if you planned things so late that all seats on conventional airlines were booked? Here’s the result:

I’m an old school photographer at heart. I prefer to plan my digital darkroom work in advance, and get as much shot in camera as possible. Some truly incredible image creators have a practice that uses the location work as a template, and from that starting point they transform the image or it’s elements in Photoshop until the original shot is unrecognizable. I like to approach it from the other way around; light it right and get it in-camera, then let the post-production respect that and make as few adjustments as possible.

Now I knew that certain background elements would have to be played with in post, simply due to budget and time restrictions now allowing me to control everything I wanted to on set. That’s actually pretty normal. What was different for me was that in the end, as Tanya was finalizing the post work, I realized that I had to go against the grain; I preferred the pilot from a different image we shot that day. So this image actually ended up being a combination of both approaches.

Check out these images from the shoot.  First there’s a timeline to show you what we did in post, then three alternate versions we shot that day, and me and the crew.  I prefer the image we ultimately used, maybe you prefer one of the alternates?  Lemme know!